Nitrogen availability and plant growth are closely related; their conjunction results in the production of all crops, including legumes, which incorporate or fix this nutrient from the air. The fixed amount of nitrogen is variable and responds to the joint characteristics of various environmental factors, such as temperatures, water balance, and soil components, which affect both the host plants (legumes) and the microorganisms in symbiosis (rhizobia).

In soybean crops, the highest nitrogen fixation contributions are obtained under conditions of high productivity and low limits to growth (Racca et al., 2001, Collino et al. 2015). Consequently, from the crop management decisions perspective, such behavior is reflected in the fact that the strategies for improving soybean performance are the same as those required to increase its potential for biological nitrogen fixation (Santachiara et al. 2019).

Microorganisms’ proliferation, root hairs infection and plants growth vary according to the concentration of diverse elements in the soil solution. Nutrient availability is one of those soil components that intervenes integrally in the biological nitrogen fixation process. For this reason, nutrients administration seeking to avoid limitations to growth in legumes participates directly in nitrogenous nutrition and results in the production of these species. In places where phosphorus resources are limited, fertilizing with this element improves both the formation of nodules and their growth and size, mainly for those located on the main root. Adequate availability of sulfur also contributes positively to the formation of nodules (Santachiara et al., 2019). This is shown by the gathered comparative evaluations of phosphorus or sulfur fertilization in the Pampas region, which refer, on average, between slightly more than 2 to 3 nodules on the main root of plants fertilized with these nutrients (Fig. 1).

Difference in nodules/plant when fertilizing 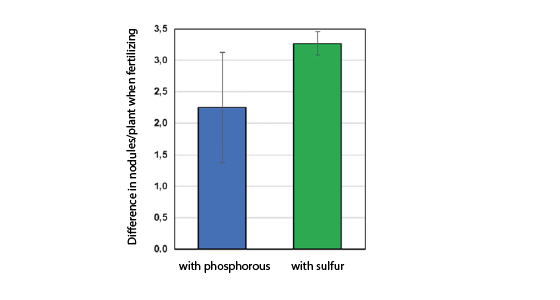 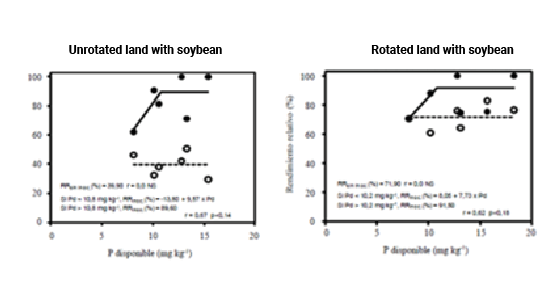 The functional articulation among components of the biological nitrogen fixation system in pastures with legumes is clearly described in the following quotation from Eng. Oscar Hernández, lecturer and researcher of forage production at FA UNLPam: "Legumes fix nitrogen because they grow". It is a short sentence that summarizes the integration between actors and their roles in this symbiosis. The virtuous circle of legumes nutrition requires anticipating crops active growth. Therefore, to achieve effective nitrogenous nutrition, a functional pillar of biological processes, a favorable growth context is required. Today, in much of Argentinean lands with legume crops, this favorable condition is reached by implementing effective fertilization and inoculation strategies. Adequate plant nutrition supports biological nitrogen fixation; therefore, the contribution of elements considered limiting to plant growth such as phosphorus, sulfur and some micronutrients results in synergistic responses in legume production.