Microemulsions: an efficient tool that improves and prolongs the stability of spray mixtures

A study by Rizobacter's LEAF lab demonstrated that this technology provides prolonged stability to the mixture and improves the performance of active ingredients which are strategic for difficult weeds control.

A study conducted at the Laboratory for the Evaluation of Adjuvants and Formulations (LEAF), recently inaugurated by Rizobacter, determined that adjuvants that generate microemulsions improve the compatibility of herbicides used in conjunction for the control of Amaranthus or redroot pigweed: the biggest weed problem in summer crops in Argentina.

“From the biological point of view, the action of Fomesafen and Glyphosate is the best solution to control this weed, but from the chemical point of view, these are incompatible herbicides. In a study performed at LEAF, we were able to observe that by using Integrum -an adjuvant with a system of surfactant molecules combined with modified vegetable oil (MSO) forming a microemulsion-, it is possible to isolate herbicides in the same broth and thus prevent them from reacting negatively to each other,” explained Juan Pablo Timpone, Global Manager of Adjuvants at Rizobacter.

The study led by Belén Aguer, Head of LEAF, revealed that within the small globules of oil that form the microemulsion, one of the products is retained and the other is left out, resulting in a highly stable mixture that increases the performance of technologies in crops and provides operational benefits for the farmer. "Curdling, in this type of mixture, generates a substance that is very difficult to clean in the tank and, in addition, can cause complications at a very strategic moment of control, because Amaranthus grows very fast and does not give second chances," said the specialist of the company. 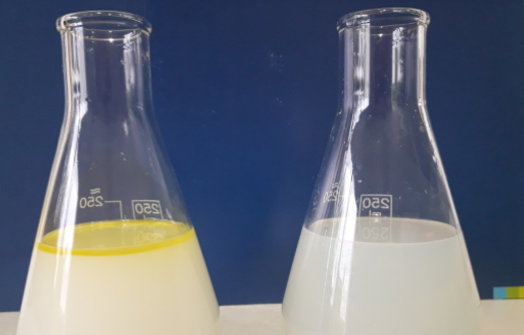 Stability that lasts for months

Researchers at LEAF were able to observe that the adjuvants that generate microemulsions, when formulated with high-quality oils and emulsifiers, also provide an improvement for oily phytosanitary products (those that the farmer sees caramel-colored and that, when mixed in water, look milky). The addition of this technology -under trademark "Rizospray Integrum"- ensures a remarkable stability in the mixture; the small oil globules that are generated have a great advantage: they do not separate nor curdle the mixture, which can remain stable for months. “When the farmer adds an oil of lower quality than that of the phytosanitary to the mixture, we see that the mixture remains stable, without separating into phases of oil and water and other substances, for a maximum of 15 or 30 minutes -oftentimes, less than 5 minutes. Today, thanks to microemulsions, we can promise farmers that they will have a stable mixture for days. Or they may have it for weeks, even months," stated Timpone.

This benefit becomes strategic for farmers who usually formulate their mixture early in the morning, then work throughout the day or apply small doses in different lots separated by long distances. "They can rest assured that they are going to apply the same mixture, with all its components," he added.

The study developed at LEAF demonstrated how the benefits provided by microemulsions impact on the performance of FOP (Haloxifop, Quizalofop) and DIM (Cletodim, Setoxidim) graminicides, strategic active ingredients used to combat monocotyledons; that is, narrow-leaved weeds, which are very widespread in direct sowing.

The benefits of microemulsions can be fully exploited if the technology is prioritized in the loading order. “Because Integrum includes a defoamer, it can be added at the beginning. This helps us prepare a mixture in which we are also taking advantage of the emulsifiers that other formulas have to mix better,” explained Timpone.

Therefore, the technology of the mixture can be structured by appealing to all its advantages from the start, so it is a facilitator ensuring that the mixture does not curdle, segment or precipitate.

There is no need of modifying the recommended rate of the adjuvant to obtain the performance benefits of herbicides that are strategic for weed control. “Based on the LEAF study, we understand today that Integrum improves weed control with its biological effect, because it is penetrating, anti-evaporating and wetting; in addition, it provides extra improvements to the quality of the mixture, with the same rate we used before. Therefore, its use does not imply changes in the cost or in the knowledge that the farmer had about the product,” Timpone added.

It should be noted that the purpose of the Laboratory for the Evaluation of Adjuvants and Formulations (LEAF), where the study was conducted, is to evaluate and measure the performance of technologies used to maintain crop health; thus, to establish the most efficient phytosanitary application technique and technology objectively and accurately for each approach, from the environmental and productive point of view.